Rashard Higgins isn’t exactly known as a speed demon on the field for the Cleveland Browns, but he was cited for going too fast off the field on Tuesday morning.

Higgins was given a citation for drag racing on Tuesday, per Scott Petrak of BrownsZone.com, yet another distraction for Cleveland leading up to its first playoff game in 17 years.

The Browns starting pass-catcher was cited with another car and a “substance suspected as a marijuana joint” was found and destroyed under officer supervision, per Petrak. It’s uncertain which car the substance belonged to.

The team said they were aware of the incident and were gather more information to deal with it appropriately.

#Browns WR Rashard Higgins cited for drag racing Tuesday morning by Westlake police. From team: “We are aware of the incident, will gather more information and handle this matter appropriately.”

Higgins almost immediately responded to the report once it started to make the rounds, but both tweets referencing the incident are now deleted.

“Foot slipped sorry,” he wrote. He followed that up with, “Trying to get away from COVID.” Higgins likely deleted the latter tweet because it was insensitive to the outbreak the Browns are currently dealing with.

Higgins is no stranger to traffic stops and shows off his cars on social media often.

Rashard Higgins Has Stepped Up for Browns

Higgins became the starter in Cleveland after Odell Beckham Jr. went down with a season-ending injury back in October. Higgins signed a one-year deal to stay with the Browns the offseason and has made the most of his opportunity in a larger role. He finished the year with 599 yards on 37 catches with 4 touchdowns.

Higgins play and confidence to bet on himself — taking less money with the Browns than he could have received elsewhere — has him in talks to land an extension with the Browns.

“My understanding is preliminary discussions have already begun between the Browns and WR Rashard Higgins on a contract extension,” Josina Anderson reported last month.

My understanding is preliminary discussions have already begun between the #Browns and WR #Rashard Higgins on a contract extension.

Higgins was drafted by the Browns in the fifth-round in 2016 out of Colorado State. This offseason he became the first wide receiver drafted by Cleveland to sign a second contract with the team since the franchise rejoined the NFL in 1999.

It’s been a nice comeback for Higgins after a miserable season a year ago when he managed just four catches for 55 yards and one touchdown all of last year.

“At the end of the day, I had to work for everything I ever got. If I had to work to get in this position, I am going to do it,” Higgins told reporters in October. “Here I am. To God give the glory. I can’t be thankful for enough. I am going to keep working, keep putting my head down, not get too big-headed on myself and just keep working. The sky is the limit.” 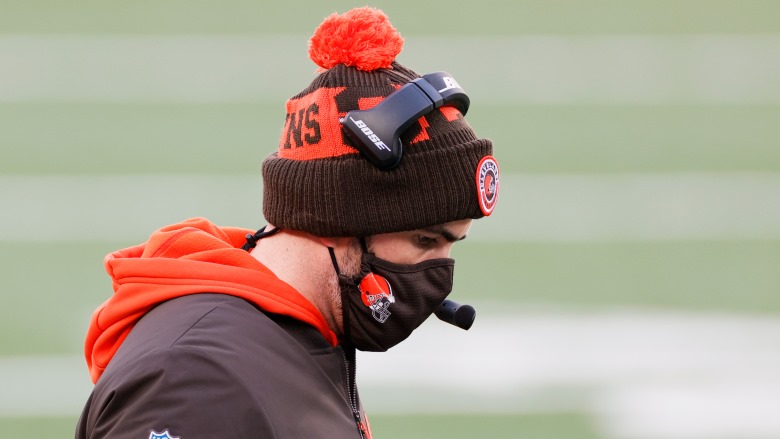 Higgins and his experience in the offense will be extra important this week, with the Browns dealing with more positive COVID-19 tests and wide receiver KhaDarel Hodge being one of the players out. Hodge played 26 snaps last week and has been a steady contributor for the Browns.

Head coach Kevin Stefanski, who calls the offensive plays, will also be sidelined for the game after testing positive.

We were informed this morning that Head Coach Kevin Stefanski, two additional members of the coaching staff and two players have tested positive for COVID-19.

“The Cleveland Browns were informed this morning that Head Coach Kevin Stefanski, two additional members of the coaching staff and two players have tested positive for COVID-19,” the team said in a statement. “Our facility is currently closed while contact tracing is taking place. The team will continue to consult with the league and medical experts to determine the appropriate next steps as the health and safety of our players, coaches, staff and the entire community remains our highest priority. Our contingency planning calls for special teams coordinator Mike Priefer to serve as the acting head coach.”