The thousands of rioters who breached the United States Capitol building on Wednesday prompted shocked world reactions, roughly 70 arrests and four deaths as of Thursday.

The rioters descended on Washington, DC, for a rally to support US President Donald Trump and “Stop the Steal”, a movement to keep Trump in office that alleges fraud cost him the November election and gave President-elect Joe Biden victory.

They breached the Capitol as a joint session of Congress went about certifying Biden’s victory, causing hours of delay before the results were certified in what is normally a mundane process.

The crowd of Trump supporters was large and appears to have included people from across the US. A few have surfaced as faces of the Capitol occupation. Here is what we know about them.

Of the four people who died, one was shot inside the Capitol complex. Her name was Ashli Babbitt and she was 35 years old.

According to local media, Babbitt was a 14-year veteran of the US Air Force from California.
KUSI News interviewed her husband, who said Babbitt was a “strong supporter” of Trump.
The Guardian reported that Babbitt took four foreign military tours, including to Afghanistan and Iraq.

Babbitt’s Twitter page features retweets of right-wing, Trump-aligned figures and memes. Many of the tweets feature comments supporting Lin Wood, a pro-Trump lawyer who was at the forefront of an unsuccessful legal campaign that alleged widespread voter fraud won President-elect Joe Biden the presidency.

Nothing will stop us….they can try and try and try but the storm is here and it is descending upon DC in less than 24 hours….dark to light!

A day before the demonstration in Washington, DC, Babbitt tweeted: “Nothing will stop us … they can try and try and try but the storm is here and it is descending upon DC in less than 24 hours … dark to light!”

The other three deaths were medical emergencies, according to DC police. They are identified as: Kevin Greeson, 55, from Alabama, Benjamin Philips, 50, from Pennsylvania and Roseanne Boylin, 34, from Georgia.

Jake Angeli, the shirtless man wearing horns, is among the most striking figures in photos from the Capitol occupation.

Angeli has been a fixture at the Arizona Capitol building since 2019, where he has been seen espousing various conspiracy theories that appear to fit in the wide-ranging belief set of QAnon.

Angeli told the Arizona Republic in an October 2020 interview that he wears the fur and horns to attract attention so he can speak about QAnon. He refers to himself as the “Q Shaman”. Supporters of US President Donald Trump, including Jake Angeli, stand by the door to the Senate chambers after they breached the US Capitol security in Washington, DC [Jim Lo Scalzo/EFE]

Adherents of the QAnon conspiracy theory believe an anonymous government official referred to as “Q” provides classified information in internet posts about a cannibalistic, satanic cabal of “Deep State” figures.

These figures engage in a child trafficking ring that Trump has been chosen to dismantle. Given his prominent role in stopping the “Deep State”, many QAnon adherents have rallied to keep Trump in office.

While some may find these theories unbelievable, and it remains unclear to what extent adherents believe them, Angeli told the Arizona Republic the “snowball has been rolling and it’s only getting bigger … We’re the mainstream now”.

The man pictured inside Speaker of the House Nancy Pelosi’s office has been identified as Richard Barnett, an Arkansas man, in interviews with local media and the New York Times.

Barnett travelled to Washington, DC to hear Trump speak, according to an interview with Arkansas media 5NEWS. 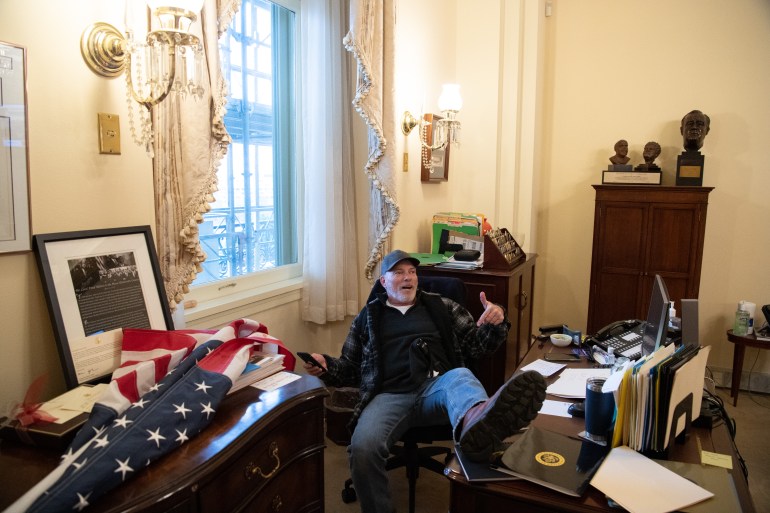 Richard Barnett sits inside the office of US Speaker of the House Nancy Pelosi as he protests inside the US Capitol in Washington, DC [Saul Loeb/AFP]

“I threw my feet up on the desk at that point. I realized some a**holes had cut me also and I bled on her envelope, so I picked up the envelope and put it in my pocket, and I put a quarter on the desk cause (sic) I’m not a thief,” Barnett told 5NEWS.

That’s Richard “Bigo” Barnett, 60, from Gravette, Ak., showing off the personalized envelope he took from Speaker Pelosi’s office. He insisted he didn’t steal it — “I left a quarter on her desk.” pic.twitter.com/aST7MCoRwP

According to The Hill, Barnett referred to himself as a “white nationalist” and raised money for “Save our Children”, a charity that fights child trafficking but has recently been co-opted by QAnon adherents.

The FBI has called on the public to assist in identifying those present at the Capitol. There are calls for federal charges, which are expected to be filed against rioters on Thursday.

When asked about charges, Barnett told 5NEWS: “Am I scared? Hell no. But yeah, there’s a possibility. I didn’t do anything. I didn’t breach the doors. I got shoved in. I didn’t mean to be there. Hell. I was walking around looking for a bathroom.”