The Cleveland Browns will have some key needs when the NFL Draft rolls around and ESPN’s draft expert Todd McShay sees the team filling a hole by picking Tulsa linebacker Zaven Collins.

Collins won the Chuck Bednarik Award, which is given to the nation’s top defensive player ahead. The 6-foot-4, 230-pound prospect racked up 53 tackles, 11.5 tackles for loss, four sacks and four interceptions.

Zaven Collins is one of the greatest to ever put on a Tulsa uniform.

While much is still to be decided on when the Browns will pick depending on their playoff performance, but McShay has the Browns slotted in at No. 23. Here’s some of what he wrote about the pick:

The playoff-bound Browns will probably be looking exclusively at the defense here, though wide receiver depth is again something to watch.

Edge rushing is this team’s biggest hole going forward. Myles Garrett can’t do it alone — he had 12 of Cleveland’s 38 sacks this season — and Olivier Vernon might not be back. Collins, who would be Tulsa’s second first-rounder in the common draft era, has closing burst off the edge.

ESPN gave Collins exceptions grades on production and durability, and above-average grades in intangibles and height-weight-speed.

Collins has had quite the journey to being a first-round prospect. In high school, he was a four-year starter as a QB/LB/S, and his only offer came from Tulsa. He developed his game with the Golden Hurricane’s and can truly do it all, with an ability to get after the passer and drop back into coverage as needed.

The Browns have lined up veteran Olivier Vernon opposite of All-Pro talent Myles Garrett the last two seasons, but that pass-rush partnership will likely come to an end next season.

Vernon ruptured his Achilles in the Browns regular-season finale. He’ll miss the postseason and likely some of next year as well as he recovers.

“Obviously I’m very disappointed for OV,” Browns coach Kevin Stefanski said. “He was playing at a high level and we’ll miss his leadership.”

Vernon restructured his contract this offseason so it guaranteed that he would be a free agent at the season’s end, as he has a “no-tag” clause. On his reworked deal, Vernon earned $11 million guaranteed through a $7 million signing bonus, $3.75 million base salary, $250,000 workout bonus and $2 million in incentives, according to ESPN’s Field Yates.

Browns defensive coordinator Joe Woods did not understate the value of Vernon to the Browns system.

“I felt like he took advantage of his opportunities throughout the season to really show how good of a player he could be for us on defense,” It is going to be tough not to have him out there just because of how he has played really from the middle of the season on, but guys will have to step up and really make the plays that he was able to make for us throughout the season.”

Browns Will Get Talented Young Players Back Next Season 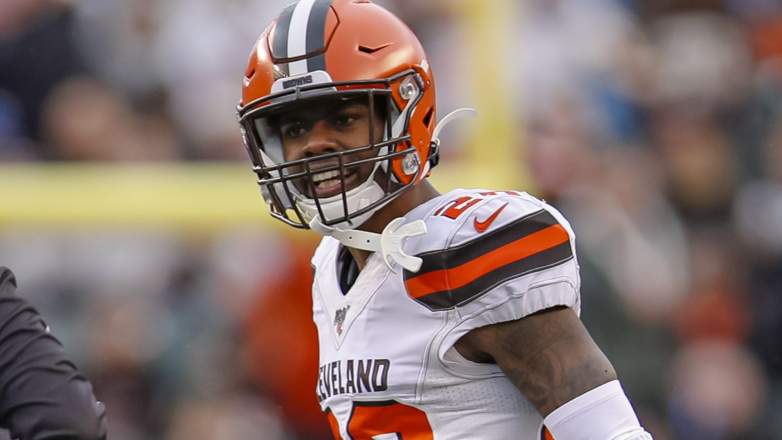 The Browns secondary has been banged up this season, but they should be getting two key young players back next season in cornerback Greedy Williams and safety Grant Delpit. That’d certainly give Cleveland a talented secondary with cornerback Denzel Ward holding down one of the other cornerback spots.

There were high expectations for Delpit, who won the Jim Thorpe Award at LSU in 2019, given annually to the nation’s top defensive back. He suffered an Achilles injury in training camp.

“It really opened my eyes to not take the game for granted. It can be taken away at any time … I took a lot of things for granted, just like walking, the simplest things like that. I definitely have a newfound respect for those things and I just can’t wait to get back on the field.”

Williams has been dealing with axillary nerve damage in his shoulder and has not played a snap this season.