Getty Protesters walk around the U.S. Capitol Building on January 06, 2021, in Washington, DC.

Adam Johnson, a Florida man, was arrested after investigators said he was the man who was pictured carrying Speaker of the House Nancy Pelosi’s podium during the storming of the U.S. Capitol building.

His jail record shows Johnson, 36, was arrested and booked into Pinellas County Jail on Friday night, January 8, 2021. He is being held on a warrant from U.S. Marshals. Johnson is a married father of five whose wife is a physician, according to NBC Miami. The news outlet reported he is not affiliated with either political party in his voter registration.

Protesters supporting President Donald Trump breached the Capitol building as Congress was debating whether to block certification of Arizona’s electoral votes for President-elect Joe Biden on January 6, 2021. The discussion on electoral votes ended abruptly as officials were whisked away and an emergency alert told those inside to take shelter.

1. Johnson Has a Hold From Federal Marshals & Is in Pinellas County Jail Near His Home

Authorities allege Johnson removed the Speaker of the House’s lectern from where it had been stored on the House side of the Capitol building, according to court documents filed in his case.

Johnson lives in Parrish, located in Manatee County. He is preliminarily charged with one count of knowingly entering or remaining in any restricted building or grounds without lawful authority; one count of theft of government property; and one count of violent entry and disorderly conduct on Capitol grounds, according to a statement from the U.S. Attorney’s Office.

Here is his jail record: 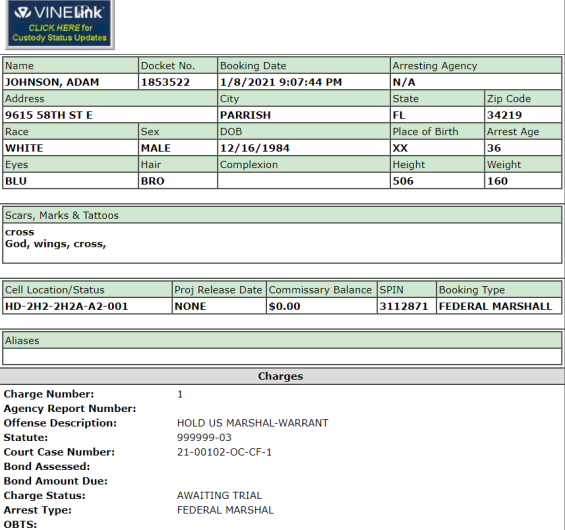 “It is alleged that on Jan. 6, 2021, Johnson illegally entered the United States Capitol and removed the Speaker of the House’s lectern from where it had been stored on the House side of the Capitol building. A search of open sources led law enforcement to Johnson, who is allegedly seen in a widely circulated photo inside the Capitol carrying the lectern,” the statement says. 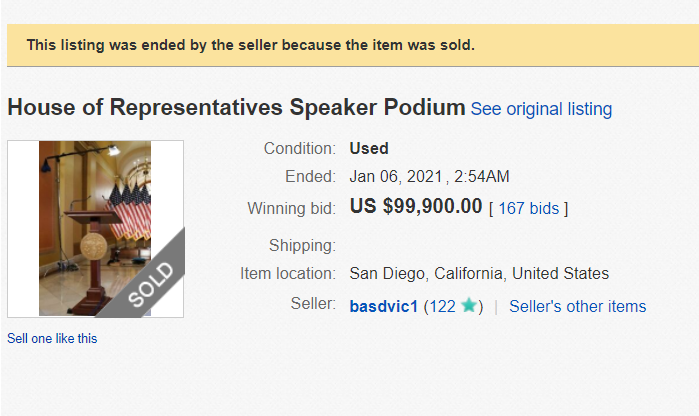 A fake eBay listing was made purporting to sell Pelosi’s lectern. The item was listed as “House of Representatives Speaker Podium.” It indicates Pelosi’s podium sold for $99,900 at 2:54 a.m., nearly 12 hours before the Capitol was breached. The listing appears in eBay’s archived listings. Mic reported the image used in the posting was a cropped image from Pelosi’s impeachment conference in 2019. The post claimed the podium was being sold from San Diego, California.

The podium never left the Capitol building, according to the affidavit filed in Johnson’s case.

“On or about January 7, 2021, the lectern was found by a member of the Senate staff in the Red corridor of the Senate wing off the Rotunda in the Capitol building,” the affidavit says. “According to the House of Representatives’ curator, the Speaker’s lectern has a market value of more than $1,000.”

The original listing for the podium is no longer available on eBay’s website. The International Business Times reported the listing offered free shipping with an estimated delivery date between January 27 and January 29. The seller, basdvic1, is an eBay member since November 2012 and had received several positive reviews, which could no longer be viewed online.

The archived listing indicates there were 167 bids, but a link to display the bids comes back with an error code.

An eBay spokesperson told the International Business Times that any listings of federal property were “being removed and ended.” But two listings were active on eBay the afternoon of January 9, 2021, claiming to sell Pelosi’s gavel.

See one of the listings: 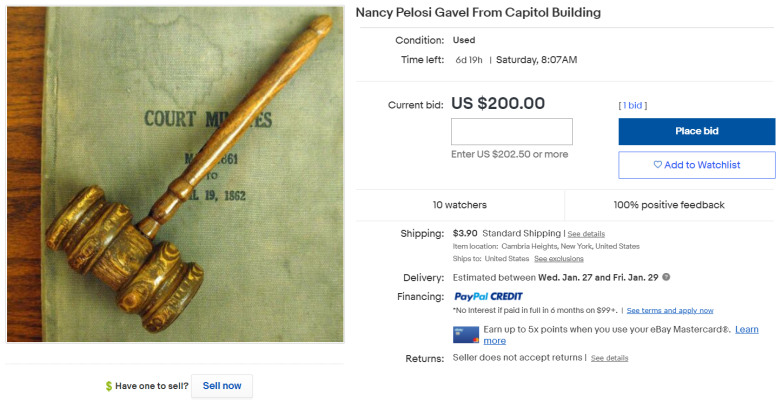 The item was listed as “Used” and had a bid of $200. The post claimed the item was located in Cambria Heights, New York.

3. Johnson Is an Independent Voter & Has Only Voted in 2 General Elections in the County

Johnson is a registered voter in Manatee County, but he is not affiliated with a political party, according to WFLA. Johnson voted in the 2020 presidential election, but The Supervisor of Elections in Manatee County told the news outlet Johnson has only voted in two general elections — 2004 and 2020.

The U.S. Attorney’s Office announced two other arrests along with the announcement of Johnson’s arrest. The others were Jacob Anthony Chansley, aka Jake Angeli, of Arizona, and Derrick Evans, 35, of West Virginia. Authorities said Chansley was the man who appeared in the Capitol wearing a horned helmet and red, white and blue face paint.

Chansley was charged with knowingly entering or remaining in any restricted building or grounds without lawful authority, and with violent entry and disorderly conduct on Capitol grounds. He was arrested Saturday, January 9, 2021, the statement said.

Evans, a newly elected West Virginia delegate, was charged with one count of knowingly entering or remaining in any restricted building or grounds without lawful authority; and one count of violent entry and disorderly conduct on Capitol grounds. He was taken into custody Friday, January 8.

“It is alleged that on Jan. 6, 2021, Evans, a recently elected member of the West Virginia House of Delegates, streamed live to his Facebook page a video of himself joining and encouraging a crowd unlawfully entering the U.S. Capitol,” the statement said. “In the video, Evans is allegedly seen crossing the threshold of the doorway into the U.S. Capitol and shouting, ‘We’re in, we’re in! Derrick Evans is in the Capitol!’”

4. Johnson Is Married to a Physician & Is the Father of 5 Children

The man seen smiling and waving at the camera while carrying the lectern of House Speaker Nancy Pelosi has been arrested in Florida. Jail records show Adam Johnson is being held on a federal warrant. https://t.co/FM81q1m6l8

NBC Miami reported Johnson is married to a local physician, and they have five children.

Allan Mestel recognized Johnson in a photo and notified the FBI, according to WFLA.

“I felt a little disassociated for a minute. It was almost like, it was surreal. I mean it was surreal. I wasn’t surprised, but I was shocked.” Mestel added. “Couldn’t believe it, the fact that I recognize somebody from our hometown, was, I was floored.”

5. A Getty Images Photo of Johnson Went Viral & Authorities Said He Shared Other Photos From the Capitol on Social Media 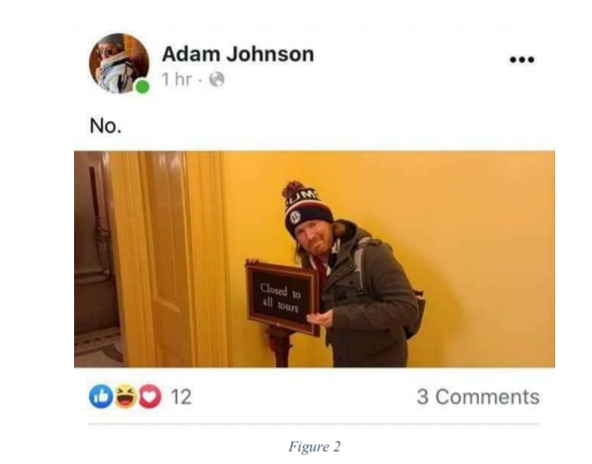 A person, who WFLA identified as Mestell, called the FBI’s National Threat Operations Center on January 6 to identify Johnson after seeing him in a Getty Images photo, according to the criminal complaint filed in Johnson’s case. The caller said Johnson lives in Bradenton, Florida, and that he and Johnson had a mutual friend. Authorities matched the Getty photo to Johnson’s Florida driver’s license photo, the affidavit said.

Investigators said Johnson also shared a photo of himself on Facebook with a sign in the Capitol that says “Closed to all tours.” Johnson captioned the post, “No.” The post was listed as “Figure 2” in the criminal complaint.