Hours before the Washington Football Team kicked off its NFC Wild Card playoff game against the Tampa Bay Buccaneers, the NFC East champions announced that Taylor Heinicke, not veteran starter Alex Smith, would be leading the team at quarterback.

According to NFL.com, Smith was listed as inactive for Saturday night’s marquee matchup, meaning that Heinicke, who had been taking the majority of practice reps ahead of his second-career start, will face off against future Hall of Fame counterpart Tom Brady.

If Heinicke, 27, defeats the Buccaneers, he will deliver Washington’s first playoff win since 2005. Saturday night will no doubt be the biggest game of Heinicke’s NFL career, a moment for which his late father, Brett, would’ve loved to see.

Brett Heinicke died at age 50 after suffering from a massive heart attack in December 2011, according to The Virginian-Pilot. At the time, Heinicke was 18 years old and had just finished up his freshman year playing quarterback at Old Dominion University. His father’s death left him heartbroken, as they were incredibly tight.

Ron Whitcomb, Old Dominion’s former quarterbacks coach said of Heinicke and his father, “You couldn’t get closer than they were. When we were recruiting him, it was almost to the point where we worried, ‘Is he going to be OK away from his dad?’ They were inseparable. Brett was going to put Taylor ahead of everything.”

Both Heinicke and his older sister, Lauren Heinicke, credit their father for teaching them how to remain humble.

“My dad would never let him gloat about anything,” said Lauren Heinicke, via The Virgianian-Pilot. “If Taylor’s team would win a game, my dad’s message was always the same: ‘It’s over. Focus on the next game.’”

The Washington quarterback recalled an eighth-grade game during which he threw his first interception and his team wasn’t able to rally back for the win. The then-13-year-old signal-caller was devastated and cried in his room when he got home.

“He told me it was just one game,” Heinicke said. “He said to just keep working hard. You’ll be successful. I took it to heart. We went on to win the rest of our games and won the championship.”

While Heinicke went undrafted out of ODU in 2015, his NFL career now includes stints with the Minnesota Vikings, New England Patriots, Houston Texans and Carolina Panthers, where he stepped in for an injured Cam Newton during the 2018 playoffs. Prior to joining Washington in December, Heinicke most recently played for the St. Louis BattleHawks of the since-disbanded XFL.

Heinicke’s Mother & Stepfather Will Cheer Him on in Playoffs

While Heinicke’s late father will be watching from above, his mother, Diane Dodsworth, who had “amicably split” from Brett Heinicke before his death, will be cheering on Washington’s new starting quarterback from home, along with her husband, Mike Dodsworth. Due to the NFL’s COVID-19 protocols, fans are not allowed to attend games in person at FedEx Field this season.

Despite where he finds himself on Saturday night, Heinicke — the most decorated football player in ODU’s recent history and winner of the prestigious Walter Payton Award as a sophomore — remains modest.

“We take his awards home now and display them in our house,” Mike Dodsworth told The Virginian-Pilot in 2014. “Those kinds of things don’t mean a lot to him. He understands, at the core, there’s always someone who’s better.” 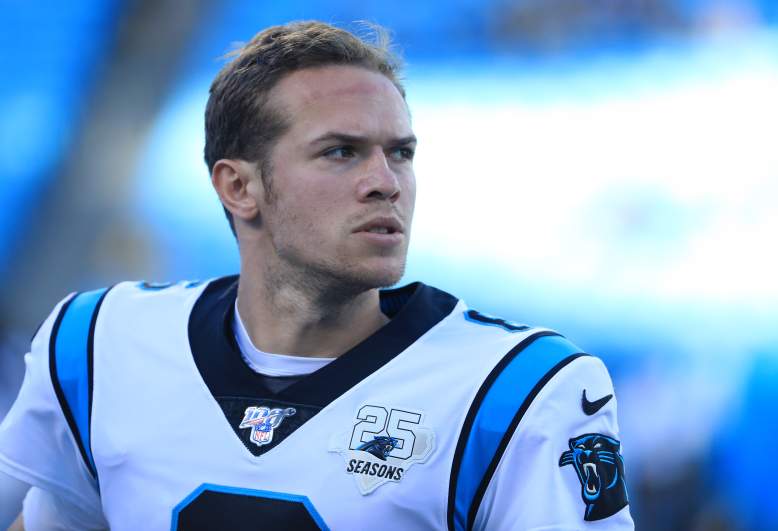 Dodsworth is also a huge fan of his stepson’s biological father. He got to know Brett pretty well while traveling with Diane to every single one of Heinicke’s football games.

“Brett was a tremendous father,” Dodworth continued. “The thing I remember about Brett was, not only was he a star athlete, he was an honor student. He’s one of these guys who could sit in an honors class, never take notes or study, and make straight A’s. That’s something Taylor inherited from his father.”

Heinicke didn’t know it at the time, but the last game his father would see him play was ODU’s matchup against Georgia Southern in the second round of the FCS playoffs in 2011. While Heinicke put up a monster performance, throwing five touchdown passes and running another one in himself, his team lost 55-48.

To honor his father, Heinicke got a tattoo (seen here) on his left arm that reads “Dad” with an angel and a quote from John 16:22 which says, “Now is your time of grief, but I will see you and you will rejoice, and no will take away your joy.”

Now every time Heinicke throws a touchdown pass, he touches his tattoo and points up to the sky.