Getty A picture shows the scene when a Capitol police officer was attacked and beaten.

An extremely disturbing video from the pro Trump Capitol riots shows a Capitol police officer being attacked and viciously beaten on the ground by a mob of rioters who are attempting to break into the U.S. Capitol building. The officer is even attacked at one point with an American flag. You can watch the video later in this story, but be forewarned it’s extremely disturbing and graphic.

On social media, people who shared the video to YouTube and Twitter are claiming that it shows the beating of Capitol Police Officer Brian Sicknick, who later died. Although the details in the video generally match the account of the officer’s father – who says he was beaten and engulfed in pepper spray – it has not been confirmed whether the officer in the video was Officer Sicknick. Heavy has contacted the police union chairman and the public affairs office of Capitol Police in an attempt to confirm that information either way (you can donate to a fund to help Officer Sicknick’s family here.)

Here is the video. It’s age-restricted, so you have to click through to YouTube to watch it there.

Officer Brian Sicknick being dragged into the mob and beaten.

A federal murder probe has been opened. pic.twitter.com/CYM18ycpGU

Closer photos confirm that a Capitol police officer is being horrifically beaten by the mob in the video. The beating occurs in a middle of a mob of people, some of whom are wearing Trump regalia and carrying Trump flags and signs that say things like Stop the Steal. Some wield crutches at the fallen officer.

Here’s the photo I was show, apparently of the late Officer Sicknick. 3 people I’d love to ID:
1) CAT Sweatshirt (did he use that crutch as a weapon?)
2) Orange Sweatshirt (with helmet and baton)
3) Scalloped Backpack pic.twitter.com/uSvA9yEX1Q

We’ve obtained pictures from Getty Images that capture the scene and may help identify the people in the mob. 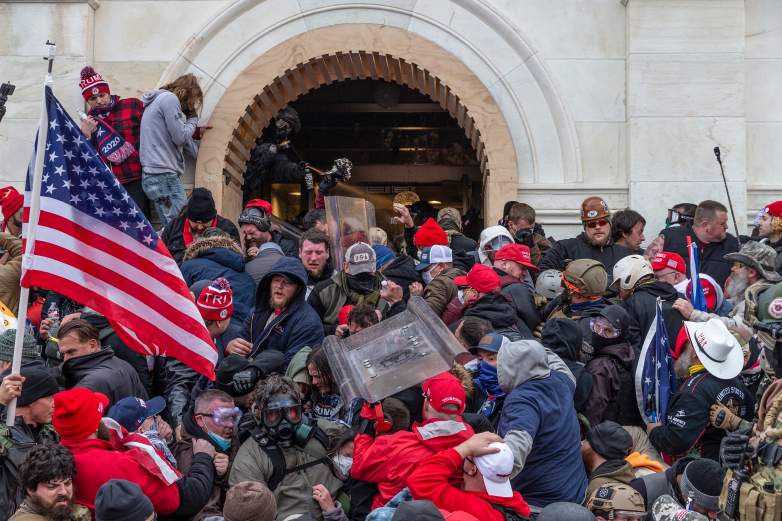 Although the people who beat Sicknick – and/or who are in the officer beating video – have not been publicly identified, charges are starting to come down against other Capitol rioters. They include a QAnon follower accused of wanting to put a bullet in Nancy Pelosi’s head; another man accused of hitting a different police officer with a lacrosse stick who said he carried a knife because he was scared of Antifa; and an Alabama man called a “big Trump supporter” by his ex wife accused of possessing Molotov cocktails. Those are just some of the charges to result so far. Another known QAnon supporter, who wore a hat with horns, was accused of violent entry and other charges. The FBI says there is no indication that Antifa was involved in the Capitol riots, contrary to conspiracy theories. 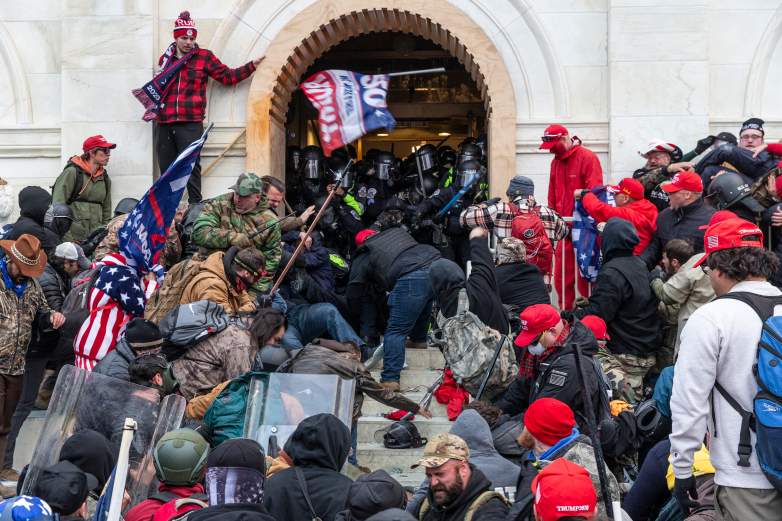 It appears from the video that the Capitol Police officer is lying in the door while people pummel and beat him with various objects. Other people stand by watching and do not come to his aid; some are filming the scene with cell phone cameras.

It appears that someone took the officer’s helmet because a man who is not in a police officer’s uniform stands nearby wearing a helmet that says Capitol police.

Some people noted that children appeared to be in the mob.

Who is the woman in the pink hat? And the guy next to her with the Capitol police helmet? They were breaking the windows with that pipe. Also, children right there? This is a call for Child Protective Services. MADNESS. pic.twitter.com/ZG6q1KUVts

The people in the video have not yet been publicly identified. At one point, someone tosses a Stop the Steal sign in the direction of the officer. Others hit him with sticks or batons. A woman in a pink hat and another man use a large pole to try to smash windows of the Capitol building.

Here’s a longer video of the mob.

01/06/2021 | Domestic Terrorists Attack CapitolTrump supporters assaulted Capital Hill resulting in 4 deaths. Officer Brian Sicknick, a 42-year-old military veteran who served on the force for 12 years, was beaten to death with a fire extinguisher by Trump supporters in the mob. Sicknick was one of more than 50 officers injured in the melee, 15 of whom were hospitalized.…2021-01-08T19:11:30Z

Violent clashes broke out at the US Capitol on January 6 when supporters of President Donald Trump stormed the building as Congress was set to vote to affirm Joe Biden’s Electoral College win. The Trump loyalists, who had been urged to march toward the building by the president, scaled scaffolding and smashed windows before breaching the Capitol, despite police resistance. At least four people died during the events, including protester Ashli Babbitt, who was fatally shot by a US Capitol Police officer as she tried to break into a secured area of the building. Three others, named by DC Police as Rosanne Boyland, Kevin Greeson, and Benjamin Phillips, died in what were described as “medical emergencies.” This footage, shot by Christopher Chern, shows Trump supporters ramming Capitol windows and clashing with police as law enforcement attempted to prevent them from entering.

OK, new project: Let’s find the people who beat the policeman to death. Someone sent me a photo of the scene but my notifications are getting flooded. Can anyone who has photos or video of that scene post them in the replies here?

Some on Twitter are trying to identify those in the video (see thread above.)

Here are some closeups from the Getty pictures. 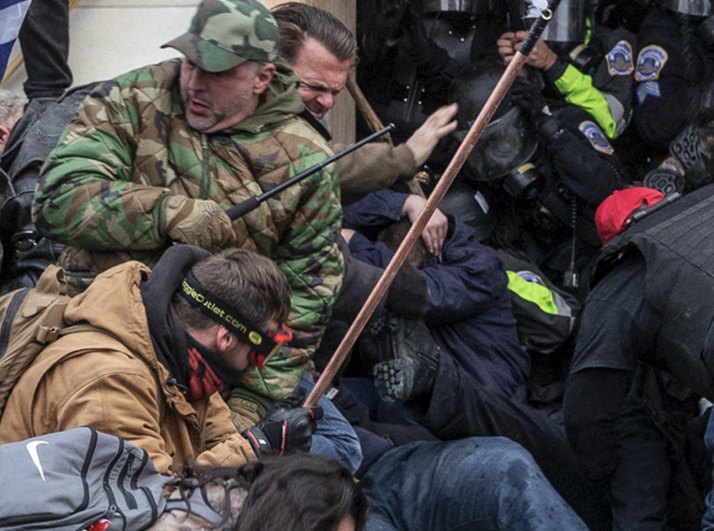 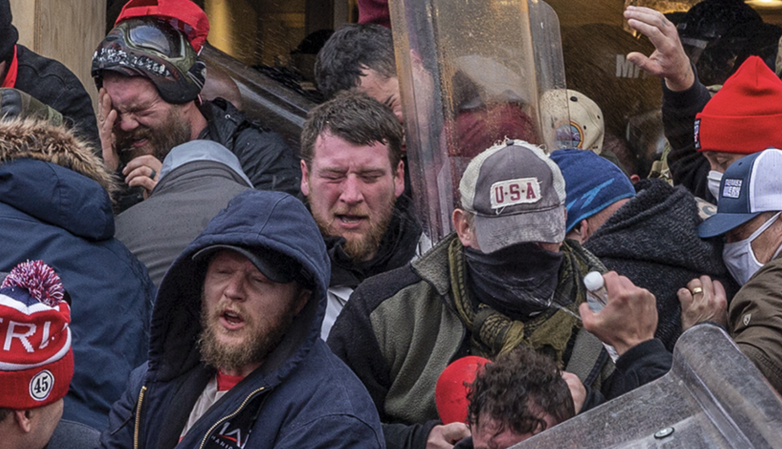 How Did Officer Sicknick Die? 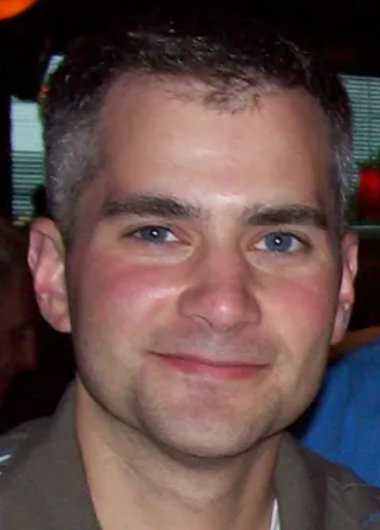 According to the Capitol Police statement, Sicknick was responding to the riots on Wednesday, January 6, 2021, at the U.S. Capitol while on duty and was injured during a physical altercation with members of the mob of Trump supporters who stormed the building. “He returned to the division office and collapsed,” the department said. “He was taken to a local hospital where he succumbed to his injuries.”

The department wrote, specifically, that he “was injured while physically engaging with protesters.”

We don’t know a lot about Officer Sicknick’s death, but some details have come out, and they do generally match what you see in the video. Sicknick was a Trump supporting military veteran who was part of a First Responders Unit for Capitol Police.

Reuters interviewed Sicknick’s father, who gave more details of what happened to his son. “As rioters overpowered Capitol police, Sicknick was pepper-sprayed and hit in the head, his father said. Ambulance crews resuscitated him twice as he was rushed to a nearby Washington hospital. Sicknick died the next day,” Reuters reported. 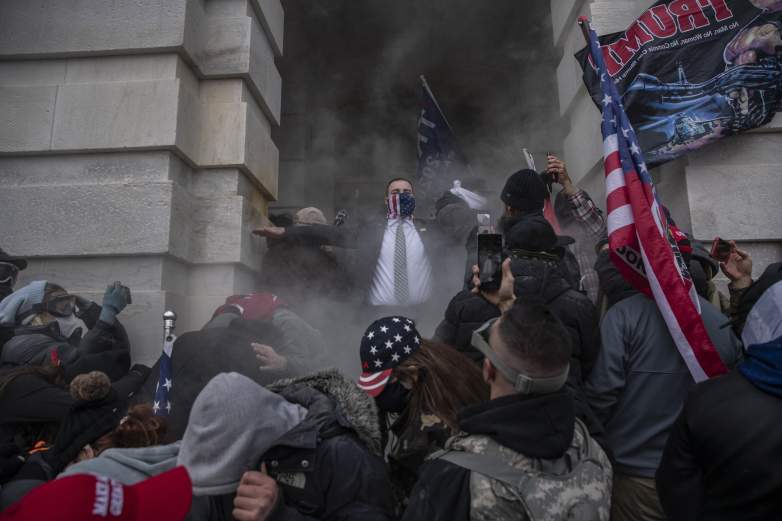 “He ended up with a clot on the brain,” his father told Reuters. “If they had operated on him, he would’ve become a vegetable.”

According to the Capitol Police, Sicknick’s death will be investigated by the D.C. Metropolitan Police Department’s Homicide Branch, the U.S. Capitol Police and their federal partners.

“If any good comes out of my son’s death, I just hope that it stops all the lunacy that’s been going on in this country,” his father said to Reuters.

READ NEXT: The Life & Death of Brian Sicknick.