According to a police report cited by WFLA-TV, Reszetar claimed the students were not wearing their masks correctly and refused to fix them when asked. She was accused of aiming the disinfectant “into the path of their faces and bodies.”

Heavy has reached out to the Largo Police Department to request a copy of the criminal complaint.

The confrontation between Reszetar and the four students was recorded on a surveillance camera. As of this writing, the Largo Police Department had not released the footage.

The police report cited by WFLA-TV says Reszetar sprayed the aerosol disinfectant toward the children’s faces and bodies. But when Reszetar made her first court appearance, she insisted to the judge that the video footage will prove she is innocent of the charges, the outlet reported.

Court records show a public defender was assigned to represent Reszetar. Heavy reached out to Reszetar’s attorney via email for comment on the case but the lawyer responded that they were “not at liberty to comment at this time.”

Pinellas County SheriffChristina Reszetar was arrested after police said she sprayed students with an aerosol disinfectant.

Reszetar was arrested and booked into the Pinellas County Jail on January 6. She spent more than a day behind bars before she was released on her own recognizance after midnight on January 8, Pinellas County Sheriff inmate records show.

According to WFLA-TV, the judge decided Reszetar could be released without bond because she doesn’t have a criminal record. The prosecutor had argued for implementing a bond.

3. Reszetar Is Licensed to Teach Students With Learning Disabilities 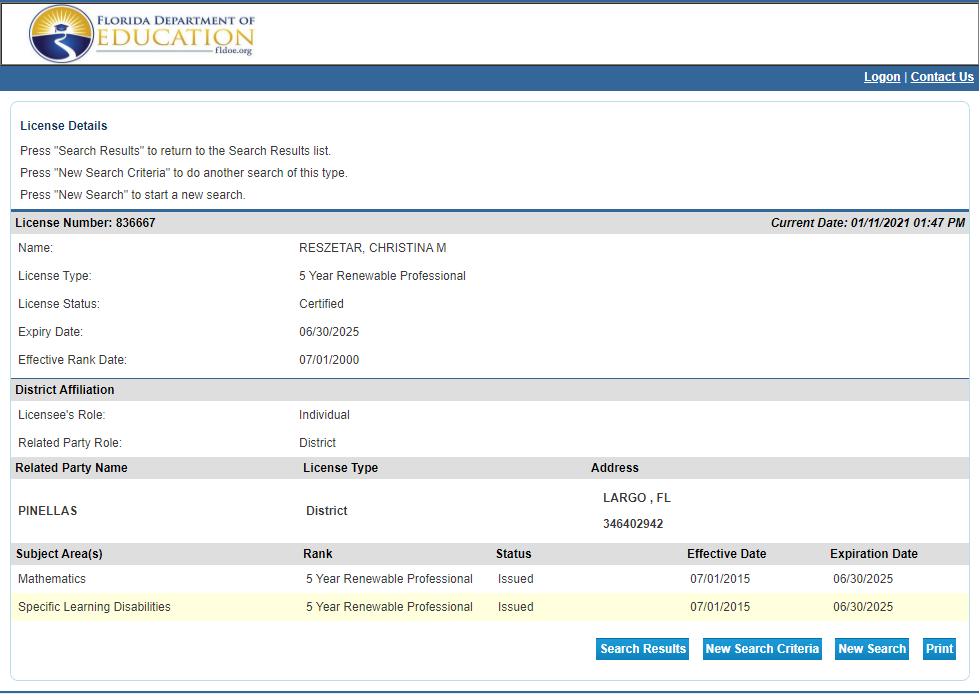 Florida Department of EducationChristina Reszetar was arrested after police said she sprayed aerosol disinfectant at 4 students.

Reszetar teaches at Largo High School, which is part of Pinellas County Schools. As of this writing, she was still listed on the school’s online directory. Her profile notes that she teaches ESE, which stands for Exceptional Student Education. The Florida Department of Education explains that this destination applies to students with learning disabilities. WFLA-TV reported that in the courtroom, Reszetar explained that she teaches “Learning Disabled Math.”

Reszetar has been a licensed educator for two decades. Her Florida Department of Education profile shows she first obtained a teaching license in July 2000 and her most recent license was renewed in 2015. Reszetar is licensed to teach math and “Specific Learning Disabilities,” according to her profile.

Reszetar has been with Largo High School for the majority of her career. WTSP-TV reported Reszetar began her career as a substitute teacher at Dunedin Middle School in 1999 and has also taught at Pinellas Technical College-Clearwater and the Seminole Vocational Education Center.

Florida has never had a statewide mask mandate over the course of the coronavirus pandemic, although the state’s Department of Health does recommend wearing one. Various counties, however, passed local requirements about facial coverings. Pinellas County residents are still required to wear masks in public, according to the county website.

That guidance extends to the schools. Students and staffers are still required to wear masks in the classroom. The Pinellas County School Board voted to renew that policy in November despite objections from some parents.

But teachers have continued to express concern about health risks now that students are back in the classroom. After Reszetar’s arrest, the news website Patch spoke with two teachers in Hillsborough County who said they hadn’t been given the option to teach virtually. Michelle Stover told the website, “We cannot socially distance in school. There are many classrooms where students are packed in tight. They’re still not 6 feet apart in my classroom. Students are not wearing their masks correctly. Many are coming from an environment where masks are not supported, and they’re defiant.” Teacher April Cobb echoed that sentiment. “I’m concerned that children are ignorant of how dangerous the virus is. Society has deemed wearing a mask is not that important right now. We’re acting like everything is normal. It is not.” 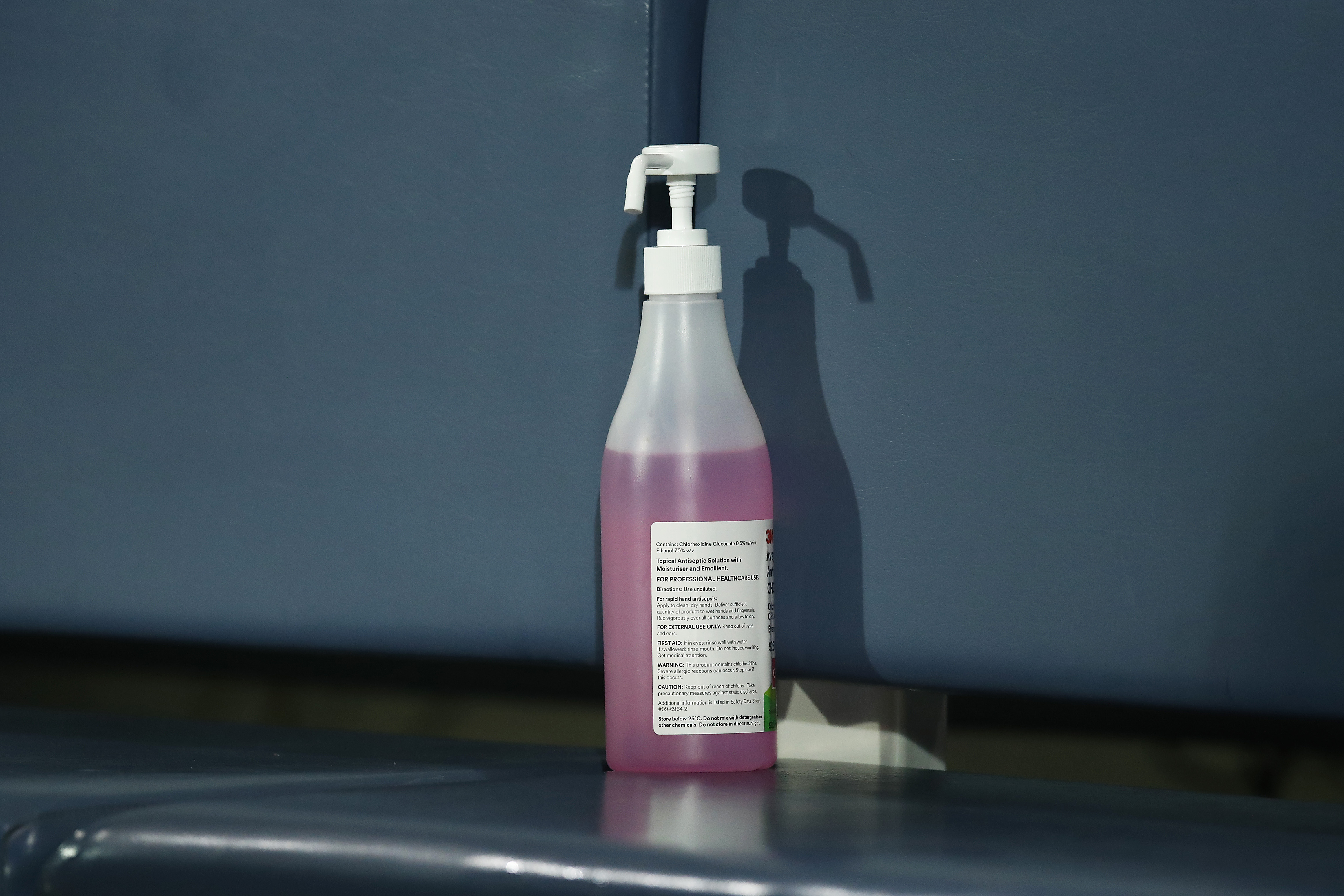 Health professionals explicitly warn that disinfectants designed to clean surfaces can be dangerous if used incorrectly. Toward the beginning of the coronavirus pandemic, the World Health Organization warned that spraying a person with disinfectant “is not recommended under any circumstances” and would not kill the virus anyway. The organization warned “the toxic effect of spraying with chemicals such as chlorine on individuals can lead to eye and skin irritation, bronchospasm due to inhalation, and potentially gastrointestinal effects such as nausea and vomiting.”

The Centers for Disease Control and Prevention recommends using gloves and protective eyewear when using chemical disinfectants and to open a window to allow proper ventilation. The CDC cautions on its website, “Do not eat, drink, breathe, or inject cleaning and disinfection products into your body or apply directly to your skin as they can cause serious harm.”

According to FOX13 in Tampa, police said Reszetar used a disinfectant aerosol spray made by Claire Manufacturing. Claire cautions on safety data sheets on its website that its aerosol disinfectant sprays can cause skin irritation and eye damage. The company notes that the bottles are marked with the necessary hazard symbols to warn customers about proper use.