Longtime UFC color commentator Joe Rogan has taken criticism from fans and media members for his work in recent broadcasts, with some calling for Rogan to quit altogether. Rogan has been part of the UFC’s commentating team for almost two decades and used to work virtually every event.

Nowadays, Rogan, who is one of the biggest names in podcasting and comedy, commentates during UFC pay-per-view events whenever they take place in the United States, his last event being UFC 256 on December 12, 2020.

Eighteen years ago today, @joerogan made his commentary debut at UFC 37.5. Safe to say he was a natural pic.twitter.com/UAon6jKuEU

Rogan and Anik have worked together on numerous shows and in a recent interview with MMA Fighting’s Mike Heck, Anik said he has “never been closer” to Rogan as he is now.

During the interview, Anik was asked for his thoughts on the criticism that Rogan has received.

Heck brought up that recently after events, the MMA community on social media has lambasted Rogan for “how he handles himself in the broadcast,” including errors he makes during shows and fixating on certain fighters. Heck said that he feels a three-person broadcast team instead of a two-person team hampers Rogan.

Anik respects Rogan immensely and believes Rogan has “never been happier” working as a UFC commentator and hopes Rogan stays with the UFC “well past” him.

ALL the latest UFC news straight to your inbox! Subscribe to the Heavy on UFC newsletter here!

“Sometimes it’s hard for me to assess the totality of a broadcast right after the fact,” Anik said to Heck. “And really, I would need to, not unlike a fan or media member, go back and fine-tooth comb the thing to address specific criticisms. I can tell you that for me, I do try to take that constructive criticism and employ it in the next show. I mean, for all the noise that’s out there, there is certainly some constructive stuff that I think you can take to the next show.”

Anik told Heck that he has seen some of the criticism of Rogan online. However, he believes the three-person team for Rogan works well for the color commentator. For years, Rogan worked alongside former lead UFC play-by-play commentator Mike Goldberg, who is now with Bellator, without another color commentator.

“I have seen some of that [criticism],” Anik continued. “I think that the social media space after these live events can be a tough place for us to sort of engage and habitate. But I think for Joe, there are a lot of different factors. I think he is never been happier in that broadcast booth. And I hate to put words in his mouth, but I really think he enjoys the dynamic. He was in a two-man booth forever, where he was just working with a play-by-play guy, he couldn’t bounce off of a fighter.”

“I think it’s been an adjustment for all of us,” Anik said. “I mean, my job, as I’ve said to you is a totally different thing in a three-man booth versus a two-man booth in terms of the real estate that I have, in terms of what is asked of me. But no broadcast is the same. And I can assure you big picture like we do look at everything that people say, and we ain’t trying to get worse, like we’re trying to get better.” 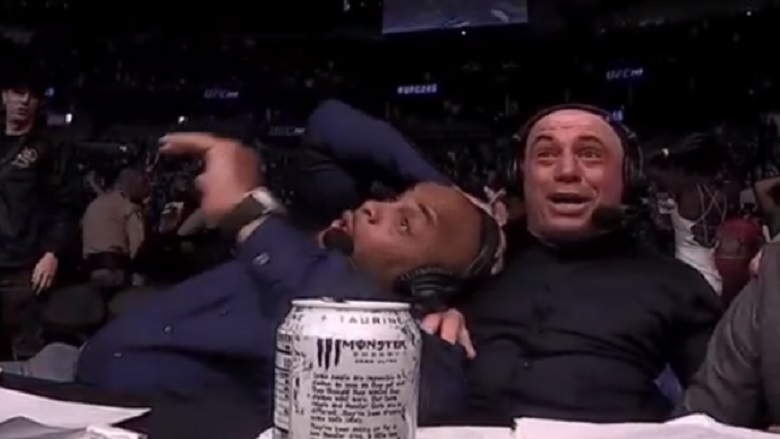 Anik acknowledged that Rogan does not commentate as much as he did in the past and he is constantly working with a different broadcast team, specifically with another color commentator. However, Anik is confident in Rogan’s abilities as a commentator and hopes Rogan stays with the company as long as he wants to.

“If you’re asking me, I think he still adds tremendous value,” Anik continued. “I still think that there’s a special undeniable quality to our broadcasts when he is a part of it. And I can assure you, he ain’t going nowhere. Again, I hate to put words in his mouth, but he absolutely loves this job.”

“We had a little bit of an international flair with some of the pay-per-views at the end of the year,” he continued. “There were big shows like UFC 251, 253, 254, that he wasn’t a part of because they were happening in Abu Dhabi. But hopefully domestic pay-per-views return [to the United States] more so in 2021 and he gets a chance to get back out there more often. You know, it’s not that easy stepping up every eight weeks trying to do one of these things and constantly having a revolving door with the broadcast team.”

“But I love the guy,” Anik finished. “I’ve never been closer to him than I am right now… and hopefully he’s here well past me.”

READ NEXT: Doubting UFC’s Jon Jones: ‘I Don’t Like That Fight’