A confrontation at Teeslanger, an Arizona business with an anti-mask policy, led to the business owner drawing his gun. The owner said on Instagram that he pulled the gun because he was assaulted, while the customer reported to local news media that the gun was drawn because he was wearing a mask. Meanwhile, Yelp had to turn off reviews for the store after a number of people left fake one-star reviews after hearing about the confrontation.

The Incident Happened When a Man Wore a Mask Into the Store, but The Two Parties Involved Are Sharing Different Accounts

The customer — who was not named — told The Foothills Focus that he had not seen a sign in front of the store requiring visitors not to wear masks. He said Teeslanger’s owner, Scott Cerkoney, told him to leave and got in the man’s face. The man said he got in Cerkoney’s face in response and then Cerkoney pulled a gun on him and told him to leave.

The customer told The Foothills Focus that he did not know who the person was at the time, saying: “I pushed him away. I didn’t know who he was or anything.”

The Foothills Focus reported that witnesses and the Maricopa County Sheriff’s Office report confirmed the details of the incident.

The owner called for people to come out and support his business and show that the business is the “alpha dog.” Here is what he shared in the video above:

This is Scott from Teeslanger and I just want to put a message out. Today I’ve received multiple, several death threats from people after Foothills Focus published an article completely misrepresenting and basically lying about what happened when I had to pull my weapon to escort a customer out of my shop after he assaulted me in my shop. I have witnesses to this — three of them — of which I’m in contact with. I wanted to put this out there for the good people that support my store. If you feel like being there and overpowering the retarded masses that we’re dealing with right now, I think the fascists and all the people that are against us are going to be there when I open this morning. So we need to overpower them, push back on them, and show them they can’t win. This is only an alpha dog situation, and we need more dogs in the fight than they have, and then they walk away like little girls. So I’m putting this message out there. This is the times we’re in. I hope you guys will be there to support me and, uh, we’ll see you soon.

Sgt. Calbert Gillett, Maricopa County Sheriff’s Office public information officer, told The Foothills Focus that the owner drew the weapon, according to both parties, and demanded the customer leave.

Gillett said: “According to both parties and witness statements, an altercation occurred at which time the owner drew a weapon and demanded the individual leave his store immediately… Due to the owner’s store policy, deputies made notifications to the department of health for review.”

Will Humble, Arizona Public Health Association’s executive director and former Department of Health director for Arizona, told The Foothills Focus that the store’s no-mask policy was in “direct violation of the Maricopa County face-covering ordinance.” However, Humble added that many businesses defy those orders without any repercussions.

Humble said: “there’s no enforcement in the state by design … and you can print that.”

Heavy reached out to the Maricopa County Sheriff’s Office and was told to submit a FOIA request for the record of what occurred and the request would then be processed, which Heavy has submitted.

On November 6, Teeslanger shared a post on Facebook with a photo from the front of the store, noting that they did not want anyone wearing masks inside the store. The sign outside read: “STOP! No masks allowed in store. It’s your choice to come inside. If you don’t like it, beat it! This virus was a weapon used by the Democrats to cheat an election.”

The post read: “NO MASKS PERIOD. If it isn’t obvious what the Democrats did here to steal an election, I’d rather you not come inside anyway.” 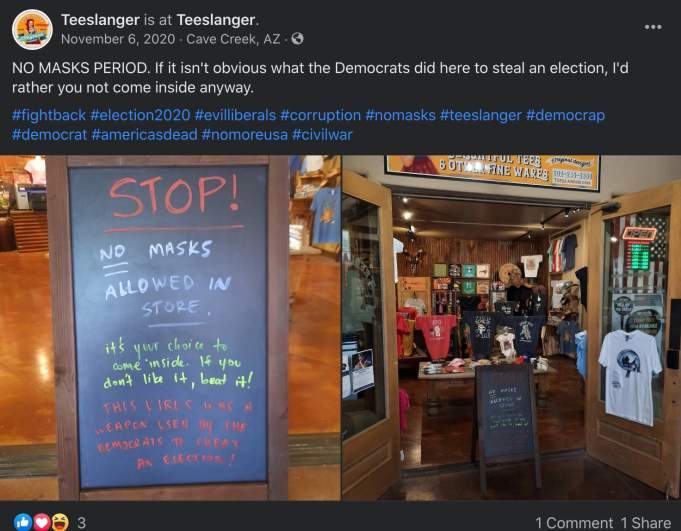 The owner also shared a video about the no-mask policy, put into effect in July, saying the policy was in place because it was hard to tell who “the good people are” with so much looting occurring.

Teeslanger is known for its pro-Trump, anti-mask stance, which it shares on its Facebook page. On December 24, the store was selling “Armed AF” T-shirts advertised with hashtags including #stopthesteal, #fraud, #revolution, and #civilwar. 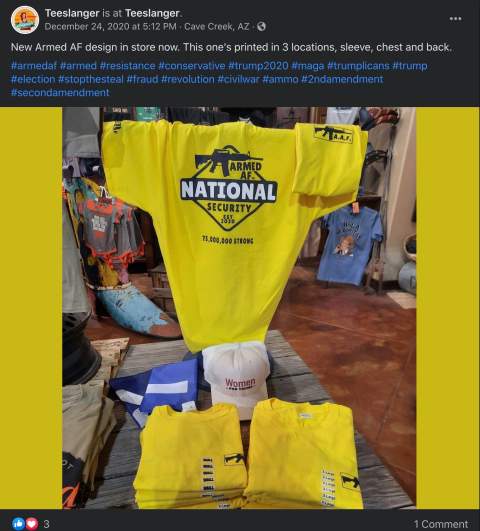 On November 14, the store’s Facebook page posted a new “Votes Don’t Matter” shirt, noting: “We got screwed by the evil libbers.” 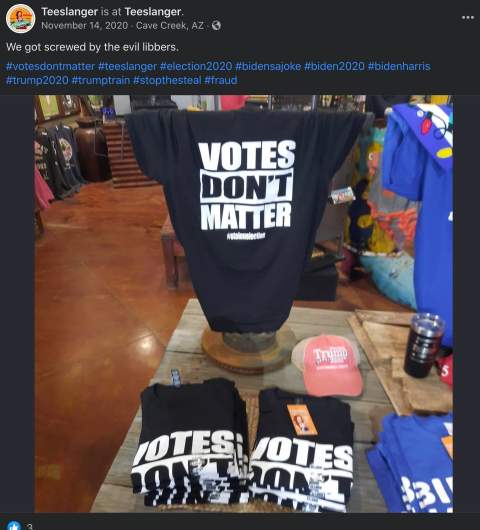 The store also had a Biden-themed punching bag. 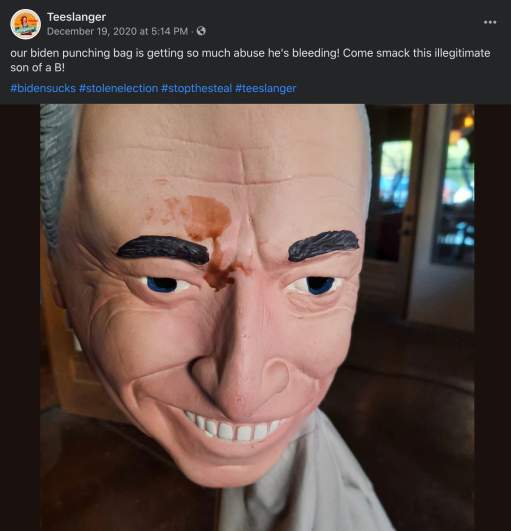 The store doesn’t only post about its pro-Trump message. In October, the owner shared a message encouraging people to buy shirts to help support local resident Johnny Ringo’s fight against cancer.

The store did the same on October 18, selling shirts where 100% of the proceeds would go to help him.

“Just to help him out as much as we can as a community would be greatly appreciated,” the owner said.

The Store Has Been Receiving Negative Reviews on Yelp

Ever since the article was published, the store has been receiving negative reviews on Yelp. Yelp now has an “unusual activity alert” notice for the store. 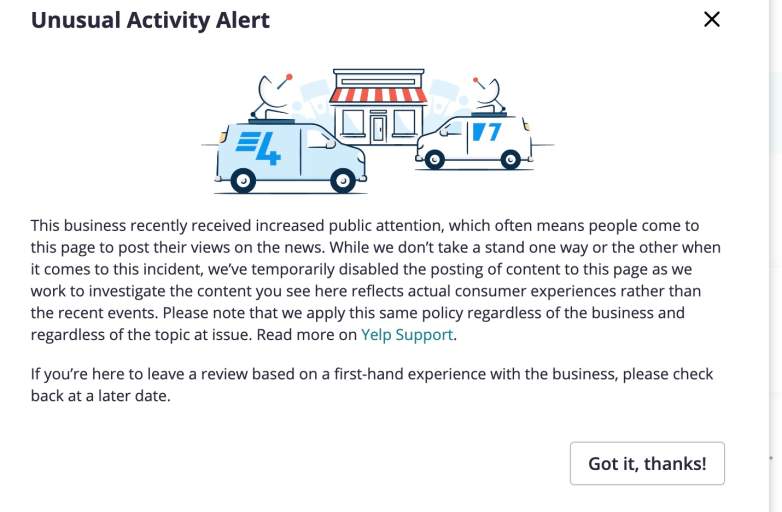 Prior to the article being published, some people had posted on Yelp confirming that they were not allowed to wear masks in the store.

Mike W. wrote a long post on November 25 that included: “You will get yelled at and chased off by the owner if you try to go in wearing PPE (unbelievable and laughable I know).” 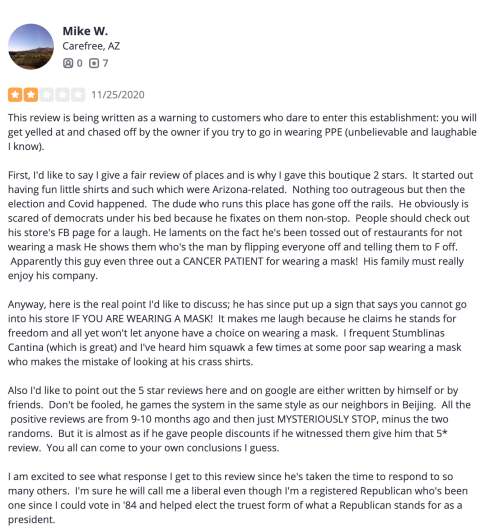 Manny M. wrote on November 15, 2020: “Would have loved to have shopped there, but the crazy owners wouldn’t let me in because I was wearing a mask. Yes… Because I WAS wearing a mask. Apparently masks are a way of controlling the population and the virus was created by Democrats to steal the election.” 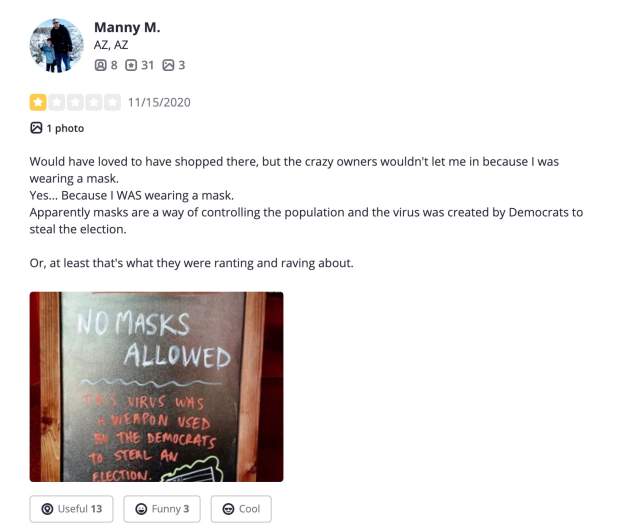 A number of fake reviews were posted on January 13. The site has temporarily disabled reviews as the content is investigated.

READ NEXT: The latest COVID-19 deaths, cases, and updates