Getty Nate Diaz applies a rear-naked choke to win by submission against Conor McGregor during UFC 196 at the MGM Grand Garden Arena on March 5, 2016 in Las Vegas, Nevada.

It all started back in October 2020 when Diaz shared a video on Twitter of Hooker knocking out Gilbert Burns when they fought in July 2018 at UFC 226. The tweet seemingly came out of nowhere and it can be viewed below:

Diaz replied to Adesanya, “Your boys the #1 welterweight right now.” Burns is currently ranked No. 2 at welterweight and is set to fight champion Kamaru Usman for the title on February 13 at UFC 258, according to ESPN.

A few days after Diaz shared the video, Hooker responded to Diaz and posed a question. He tweeted, “so 55 or 70,” expressing interest in fighting Diaz at either lightweight or welterweight. See Hookers tweet below:

It’s been three months since Hooker replied to Diaz, and the fighter from Stockton, California has still not answered. Hooker is now scheduled to fight Michael Chandler in the co-main event of UFC 257 on January 23. 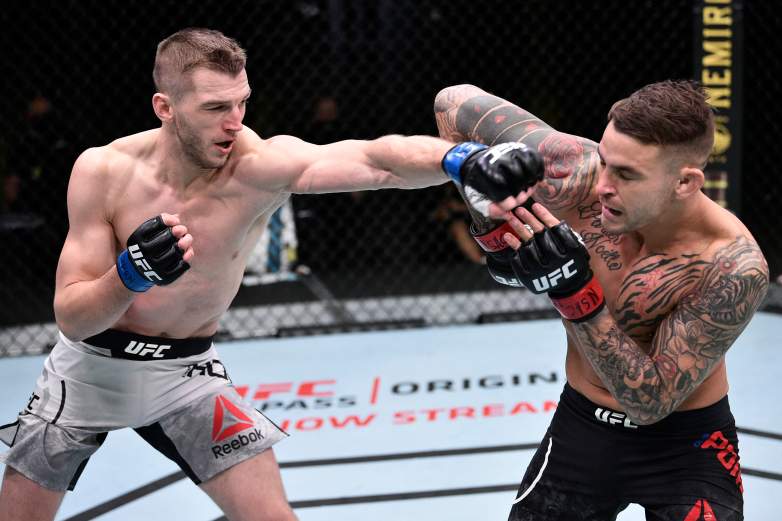 ALL the latest UFC news straight to your inbox! Subscribe to the Heavy on UFC newsletter here!

Hooker Said ‘Nothing Happened’ After His Tweet to Diaz, Wants to Fight Nick or Nate

In a recent interview with ESPN’s Ariel Helwani, Hooker said that he never spoke with the UFC about a possible fight with Diaz. But The Hangman, who has a lot of respect for the Diaz brothers, said he would love to fight either Nick or Nate.

“Nothing happened,” Hooker laughed. “[Diaz] is as game as they come. I’ve got a lot of respect… I myself am a fan of this sport. Yo, watch the Diaz brothers, seen them compete, love how game they are. I would love to get out there and compete against one of them.”

Hooker told Helwani that he would have fought Diaz at whatever weight class he wanted.

“I obviously put my hand up for the fight [at] whatever weight he would choose to fight at,” Hooker said. “That fight and then the style of which he fights intrigues me a lot. You know he’s gonna come, he’s gonna push your pace and he’s gonna bring the fight. So that’s always got me excited but yeah, nothing came to fruition from it.”

Hooker also said he would fight Diaz at 185 pounds, wherever the fighter wants. “[It would be] very cool for me, very surreal to compete against him,” Hooker said.

Hooker has a tall order ahead of him. The Hangman will meet multiple-time Bellator lightweight champion Michael Chandler in the co-main event of UFC 257 on January 23. The fight will mark Hooker’s first since his three-fight win streak was snapped by Dustin Poirier in June 2020.

Chandler, who is the UFC’s biggest signing since former Bellator and ONE welterweight champion Ben Askren, will make his promotional debut at UFC 257.

READ NEXT: Doubting UFC’s Jon Jones: ‘I Don’t Like That Fight’