Getty Nico Mannion #2 of the Golden State Warriors dribbles past Kyle Guy #7 of the Sacramento Kings.

The Golden State Warriors had a lot of hope the day of the 2020 NBA Draft. Having their stars Steph Curry, Klay Thompson, and Draymond Green healthy and working out the team could expect to return to the upper echelon of NBA teams.

That possibility would be furthered by the team having the #2 overall pick of the draft. Adding a talent of that caliber to a trio as good as this one would make any NBA front office smile. Yet we know how it all played out.

The Warriors were decimated once Thompson tore his Achilles. The injury effectively ended any chance of the team’s competition for a title.

However, the team had to turn their focus to the draft as they needed to ensure they began to solidify their foundation for years to come. Luckily they were able to find more value past their high draft pick of center James Wiseman. 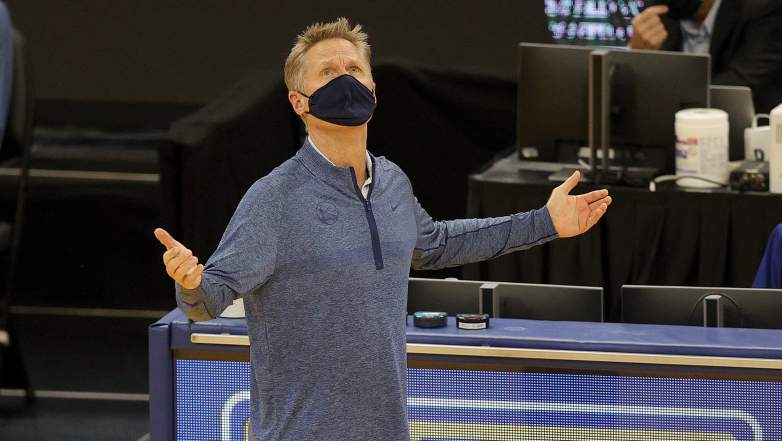 Given that the team only won 15 games last season, the Warriors were not invited to the NBA’s continuation of the 2019-20 season in the Orlando bubble. With this, some members of the Warriors may have their own bubble experience soon.

Warriors head coach Steve Kerr commented on the possibility of Mannion joining them and how it may help his development overall.

“We’ll make the decision when we get to that point but I know Nico, in particular, could really use a stretch of just playing 30-plus minutes every single night,” Kerr said via the Warriors Soundcloud page. “He just hasn’t had a chance to play much. … I think it’s especially valuable for Nico and that would be the plan.”

“It definitely hurts our development program, just like it hurts everybody’s [plans],” Kerr said. “If this were a normal season then Nico would go down to Santa Cruz and play in a game and maybe play 30-plus minutes and then be active here for us the next night at a Warriors home game. So, it’s just a completely different vibe. We have to change the development plan, which means Nico’s doing a ton of work pre- and post-practice with our development staff. He is doing a fantastic job.”

Mannion is Confident He Can Make A Difference 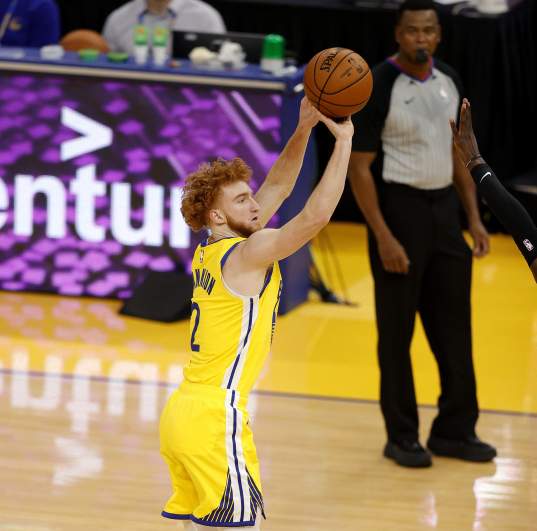 KingsNico Mannion #2 of the Golden State Warriors shoots the ball during their game against the Sacramento Kings.

The reason this can be a significant issue for the Warriors is due to Mannion not being able to report to the Warriors as frequently as he would be allowed during a regular season. Given the absence of the usual preseason games and an earlier G League start, many players who may have been called up are currently left in limbo.

Nonetheless, Mannion has remained confident. Prior to playing in his first NBA game against the Sacramento Kings, he spoke openly, via a reporter’s video conference, about his fit on the team and where he can be effective.

“I can see myself out there on the floor. I think I fit that style, just the quick decision-making.”

“They just told me to be ready. If someone goes down, I’ll be there. Just trying to adjust and learn as much as I can right now. Trying to see it as a glass half full right now that I get some more time to prepare. That’s kind of how I’m looking at it.”

From there, the rookie pivoted to what specifically has begun to change for him and how he’s adjusting to the game.

“I’m feeling a lot more comfortable with the ball in my hands, off the ball, wherever I’m playing. I feel really good on the floor. Shots are starting to fall. Like I said, one thing I can bring is energy. Just trying to bring that every day in the scrimmages and live drills.”

“That’s kind of what I have going through my mind every day. Be ready, because at any point I could get that opportunity.”

The G League season is set to begin on February 8th. Either way, Mannion’s confidence will be able to serve him well whether in Orlando or with the team on a regular basis. If he can keep that morale high, he has the chance of becoming an effective player for the Warriors in the future.